I think I was avoiding my oldest work in progress (the daisy square afghan), by way of, starting another project from deep stash.

My husband gifted me a drum carder and raw merino fleece the first Xmas after I started spinning. I was only spinning a couple months by this time and had no experience with raw fleece. I was so lucky that I didn’t felt/over scour/ruin the fleece during the washing process. After washing, I tried spinning and koolaid dyeing a few skeins but several pounds went into stash. And there it waited.

In my avoidance of the WIPs I already have going (daisy afghan, viajante, socks etc) and should be doing I went to my stash.. just window shopping, really. I came across one of several bags of this merino fleece. 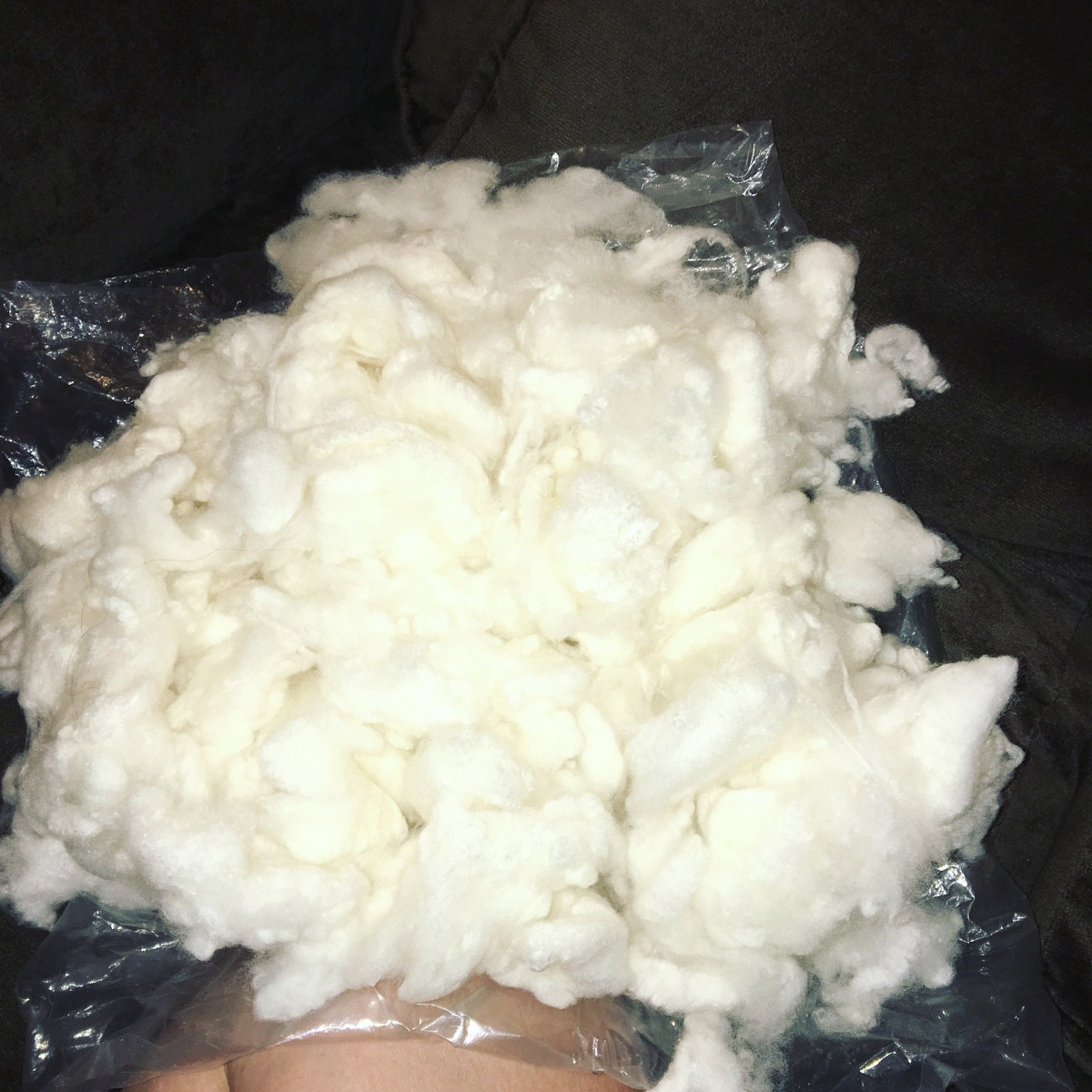 This fleece is just gorgeous. Incredibly soft, from a coated sheep, crimp to sing about, and bright white. (Many of the pictures have a yellow cast from the lightbulb, but it’s a true white)

I’ve had this fleece for years. I really wanted to try spinning a textured single that would show off that crimp. It’s such a good thing I had stashed this fleece long enough to learn Laura Spinner’s magic thumb technique.Magic thumb video

That technique is so cool for long locks but it also works for fine wool.

Specifically, magic thumb is able to save lock structure and crimp like no other. It made this airy woolen coreless corespun. Keeping the crimp throughout the yarn was important to me.

It’s those curls I wanted to save in spinning the yarn and hopefully try to keep in a finished project.

I would grab a handful of the clean locks, and lightly hand pick and spin magic thumb. I had spun 3 skeins when I thought how awesome a blanket would be. That was the plan when I warped the loom.

Hahahaha. That’s too funny!  I settled for a shawl since a blanket might take another 20years. But initially, the grand idea was making several strips that would be whip stitched together for a blanket. I started spinning the yarn on May 22,2016 and pulled the finished piece from the loom on June 4, 2016. 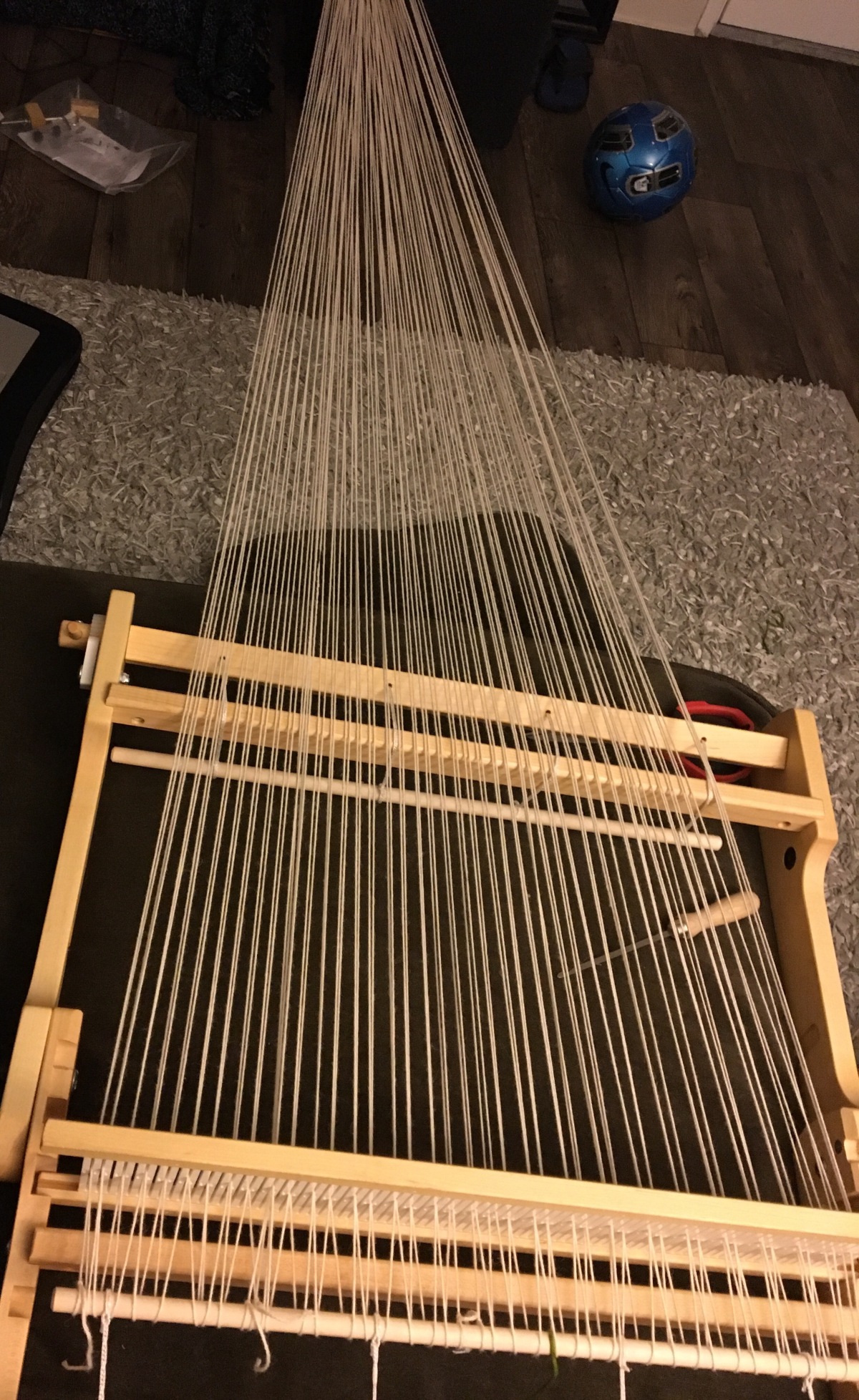 The loom was warped with 2 skeins of a white commercial yarn, made of, 50% alpaca, 25% merino, 25% silk. Since the weft was bulky, I warped every other slot. This being only the second attempt weaving, I wasn’t sure how this would work out, but gauge works the same in weaving, as it does with knitting and crochet. I wanted a fabric that was soft and drapey vs something stiff and able to stand upright by itself.

I wouldn’t have had enough yarn to warp had I gone every slot, so every other slot worked perfectly.

Pulling little puffs of the weft through the warp threads that had my favorite crimpy bits I wanted to show, as I went. Trying to keep things loose, airy, drapey, by not beating too aggressively. 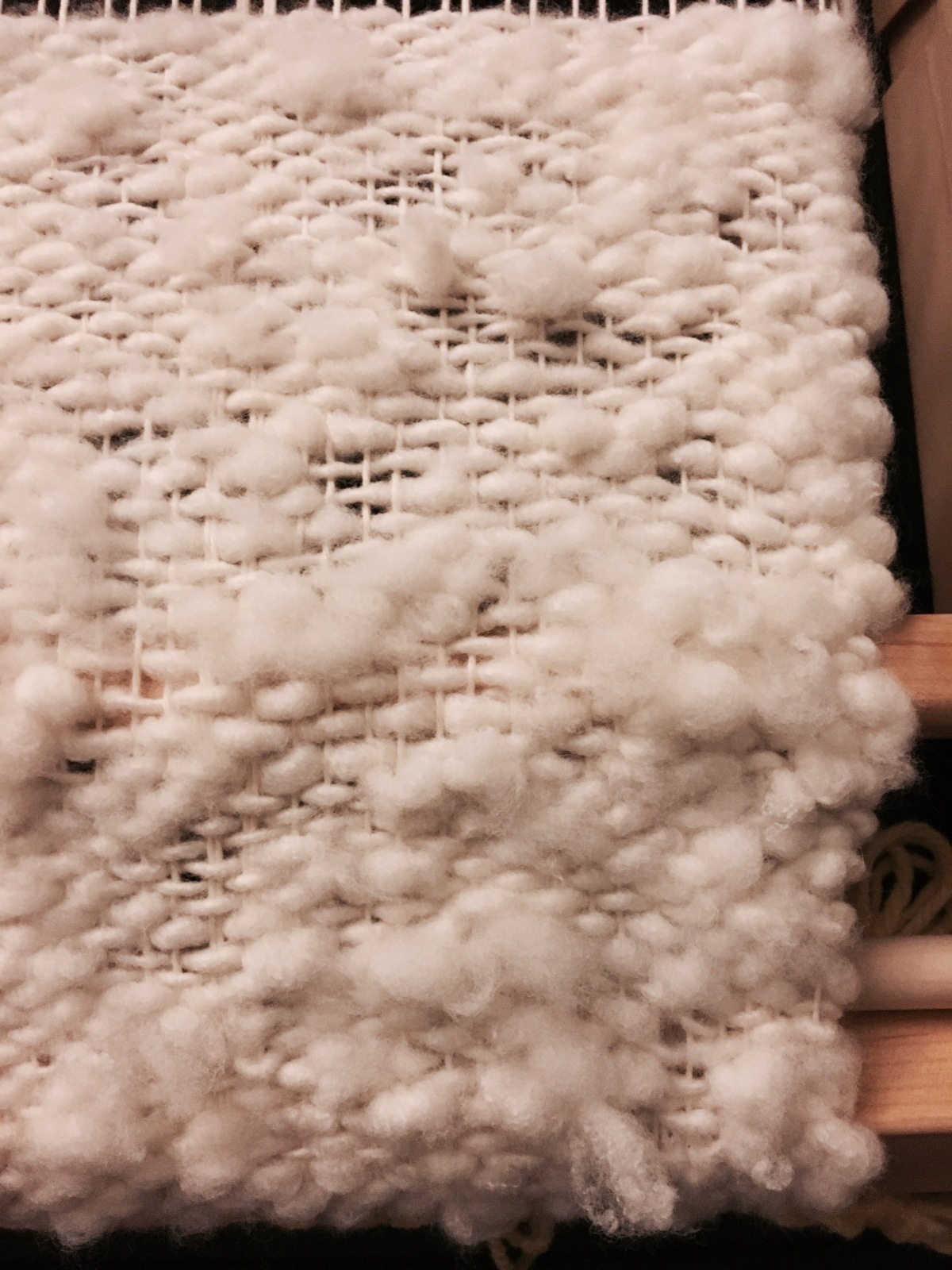 The crimp I love was being maintained. The edges stayed relatively even. Puffs happened on both sides (front and back) equally.

With all the white, the curls and crimpy texture was the fun part of this yarn. I’m surprised I was able to power through and not get bored with all the white. When I look at all the progress photos they all look the same. I can struggle to get through a project that is all the same blah color. 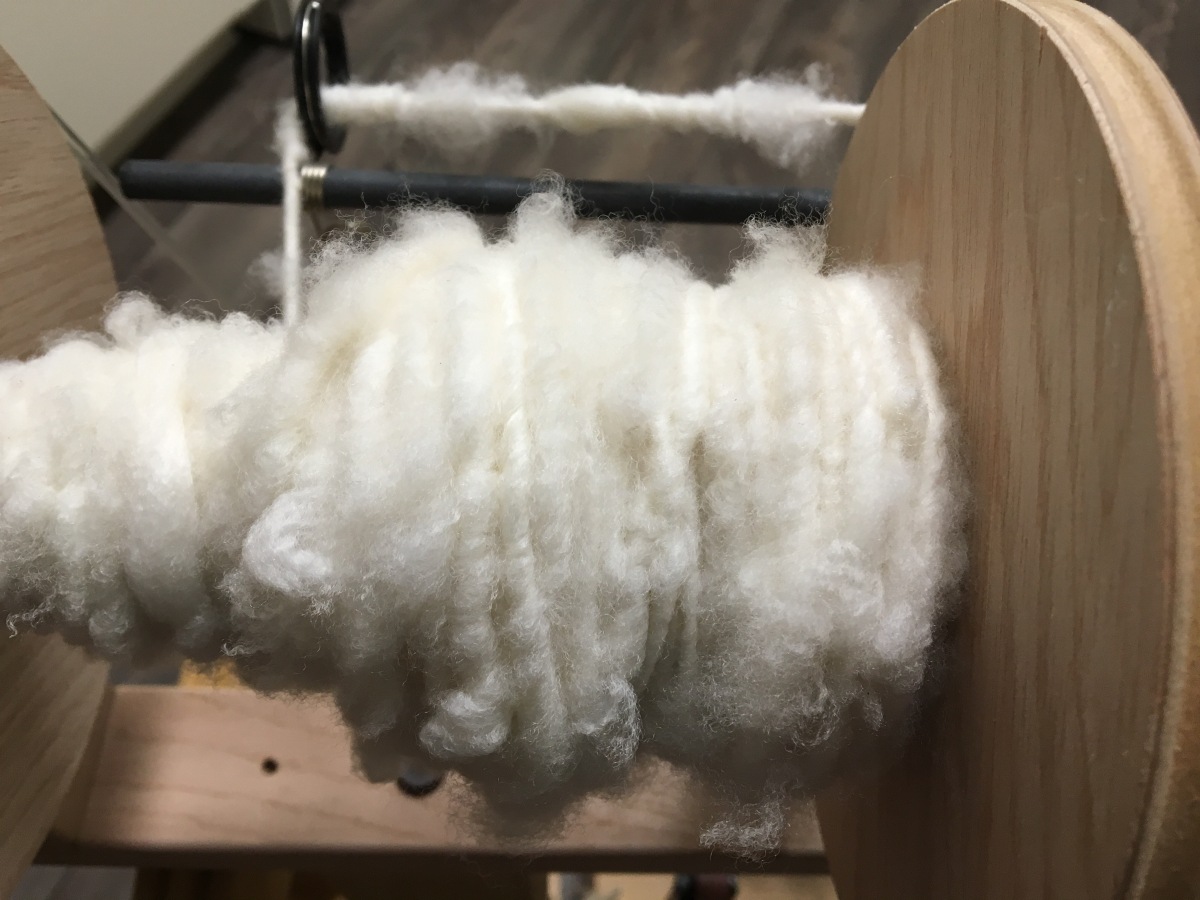 I went through the handspun pretty quickly, and would stop weaving to spin a couple more skeins.

It is unreal to me how much yarn weaving takes up so quickly. I warped the loom on May 29. This shawl is 2feet by 6ft and used over 10skeins of yarn.

This has me thinking about future projects and really needing to be sure that I have enough to get through a project.

By the end I had started weaving much tighter in comparison to the looseness in the beginning. This is ok by me, as it is able to slide around to even out. But I can’t really tell. My husband pointed it out to me. 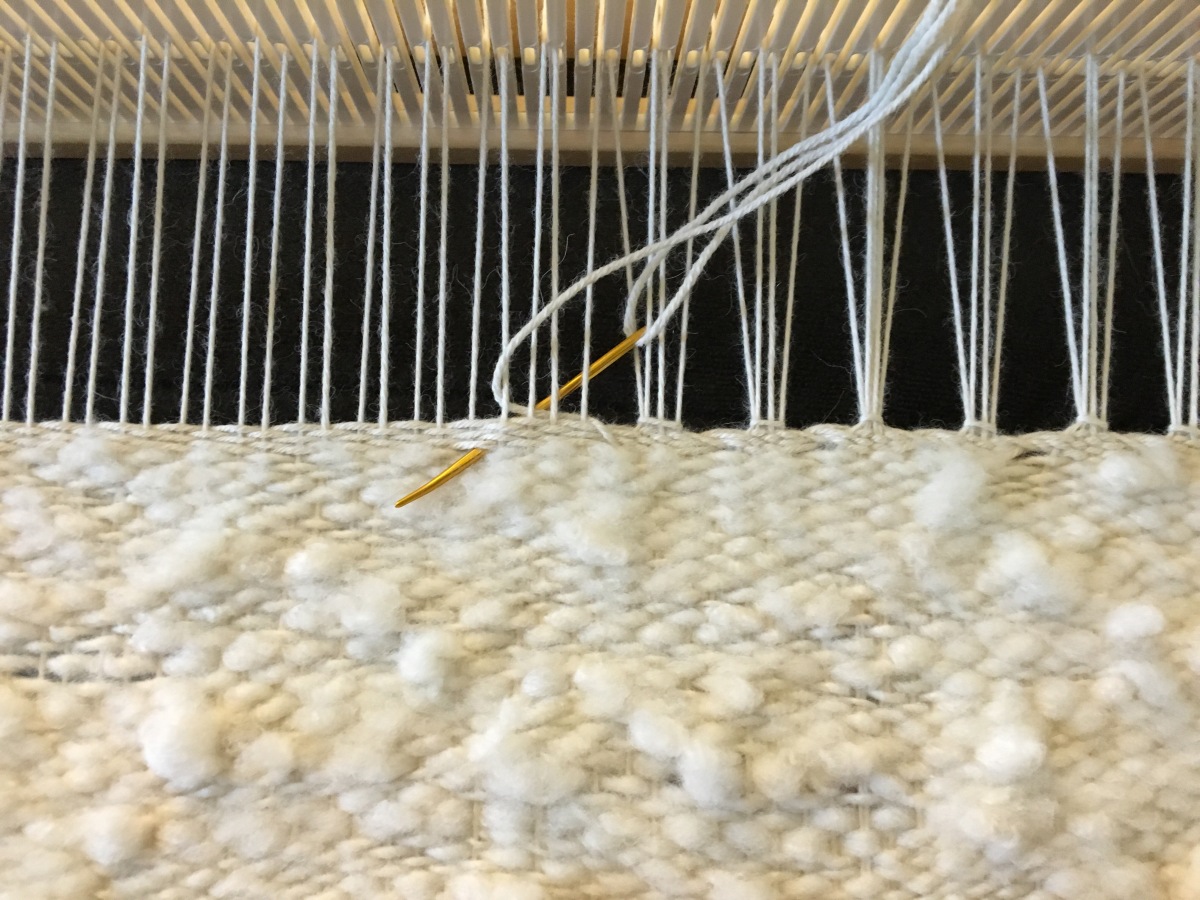 I tried a “new to me” way to end this project. Instead of a Damascus edge, I used hemstitching.

I much prefer hemstitching. This method is much easier for me. It’s easier because it’s still held tightly in place on the loom. Whereas, the other method I tried, it had to be cut first and then tied. As soon as it’s cut its floppy and moving around. I am really interested in all the different ways the ends can be done.

I also prefer the way this looks compared to the Damascus edge or the grouped tie off. This gives that little design element for a cute edge. 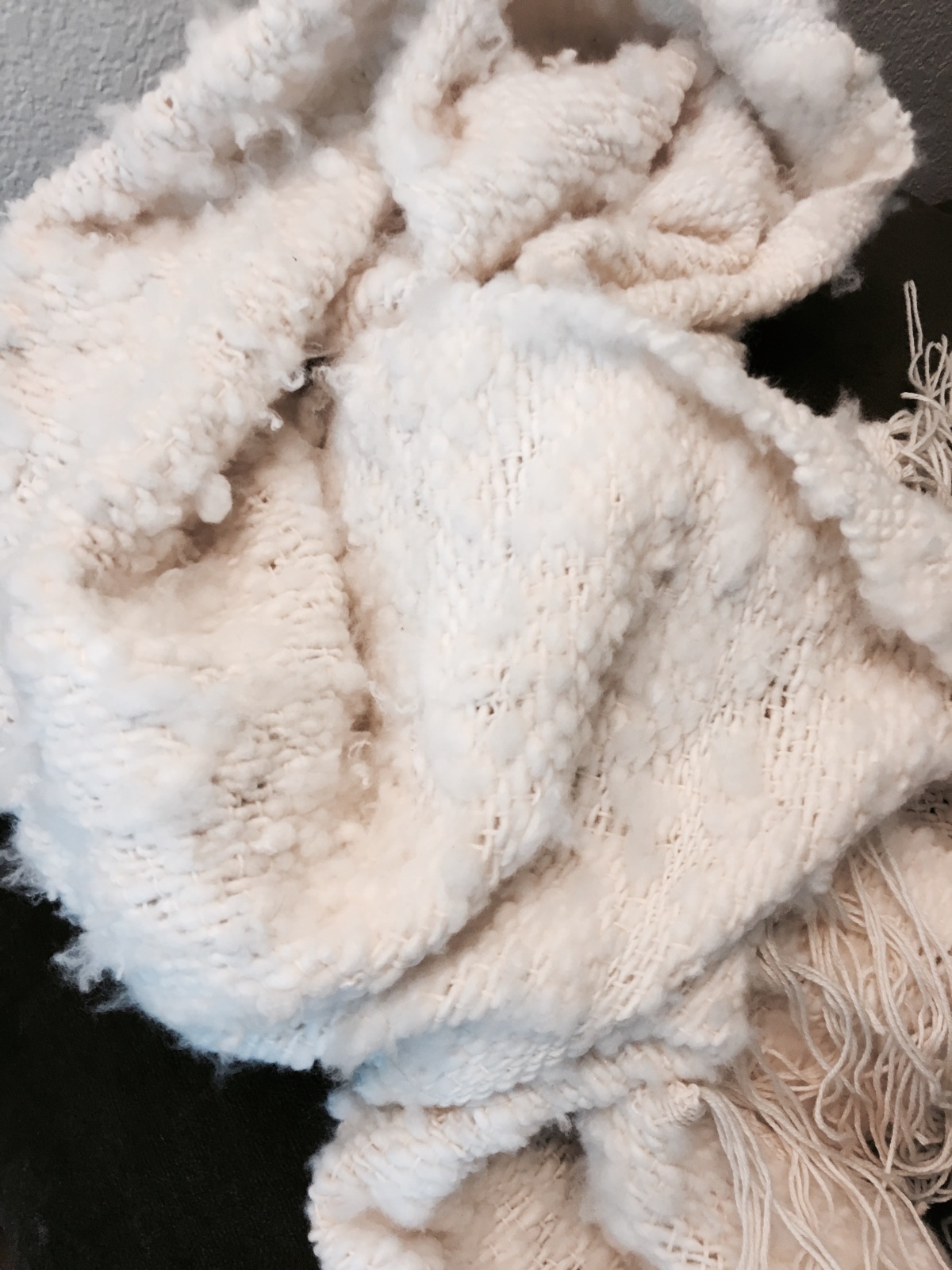 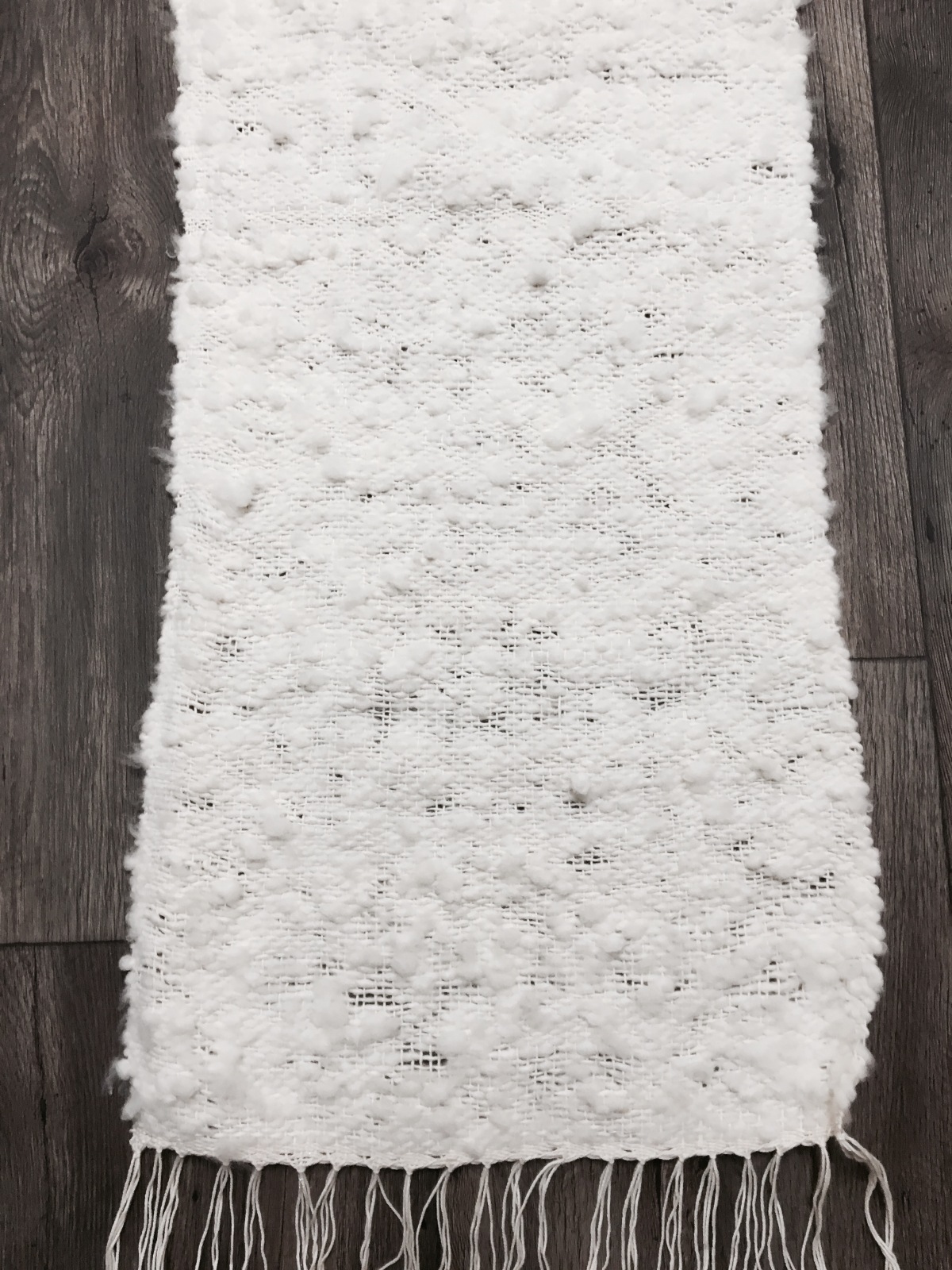 I’m really pleased with how it turned out. It would be pretty cool to have a blanket like this. I just don’t think it would get finished.

For my first sheep to shawl I think it turned out really nice.

It does feel like an accomplishment to take raw wool and process it, spin it, then weave it. Weaving is so easy and so fast compared to my knitting/crochet it almost feels like I’m cheating.

My husband said he really likes the way the loom looks when it’s all warped up with a project on it. I have to agree it looks almost like a musical instrument.

2 thoughts on “my first sheep to shawl”